Petition for light rail in Galway 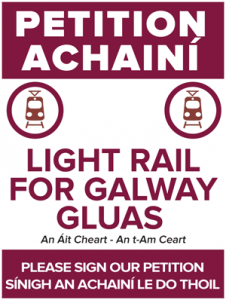 This Saturday will see the next step in the campaign for the roll-out of light rail in Galway. Deputy Connolly said she is now following up on the commitment given by her at a packed public meeting on Thursday 30th November, 2017, to initiate a petition campaign which will show the demand for light rail in Galway. This campaign will start on Saturday on Shop Street and will continue for the next 8 weeks. The campaign is in response to the Minister’s assertion that there is no demand for such a system when Deputy Connolly raised the matter recently in the Dáil. The purpose of the campaign is to clearly show that that demand exists. Deputy Connolly is appealing to everyone to support the campaign by signing the petition or by coming on board as volunteers to collect the signatures. Deputy Connolly said the provision of light rail is an essential part of the solution to the traffic congestion problems on our streets along with the roll out of park and ride facilities and an integrated public traffic system. Indeed, she said, it is the most sustainable solution given our legal obligations under climate change legislation. Moreover Galway is one of five cities specifically identified under the National Development Plan Ireland 2040 as destined for significant population increase in the coming years. In this context it makes sense to plan for the roll-out of a light rail system to meet the growing needs of an expanding city in a sustainable way. Deputy Connolly along with a team of people will be on Shop Street this Saturday between 11 and 4. If you would like to get involved as a volunteer with the campaign you can contact Deputy Connolly’s office on Flood Street, Galway, or 091-567870.